Titans demonstrated the reason for their name for much of this encounter, a big pack gaining the lions share of possession and, with it, greater scoring opportunity.

Too often this year the clinical nature of the modern game has had Albanians outweighed and the first half this week was no different.

The second period gave home supporters something to cheer about but not enough to gain League points.

The first half hour produced three tries for the visitors from Jarrard Hayler, Alfie Petch and giant scrum half Lewis Webb. Gary Kingdom converted all three.

Just on half time Dan Watt dived out of a desperate tackle and converted his own try.

Six minutes into the second half Morgan Thompson’s clever dummy put Peter Warne over for Watt’s improvement and A’s seemed to be closing the gap. But a penalty try from a scrum and a further score from Connor Baker put matters beyond doubt.

Lloyd Anderson’s driving run cheered up the home crowd when he handed to Watt whose scoring pass released Toby Munday. The captain’s conversion ended the scoring.

Worthing are the hosts next Saturday. Kickoff 15.00hrs. 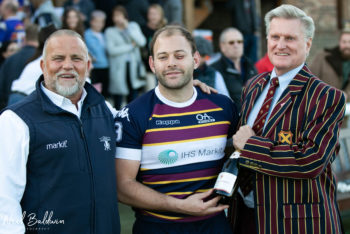