Saints traveled to a much anticipated cup final versus an unbeaten Harrogate team at Derby RFC.

The game promised to be a classic encounter, this proved to be the case throughout the 80 mins, as both teams set about proving why they had both won their respective leagues and playoffs.   In the first 20 mins Harrogate put lots of pressure on the Saints defence who stood up to the challenge and as the half wore on started to take control of the game, scoring the 1st try of the game just before half time courtesy of Steph Plunkett, converted by Beth Saunders.

Second half started with Harrogate scoring a try but failing to convert. 7-5 Saints. Saints continued to show their attacking prowess and resolute defence as they breached Harrogate’s resiliance through pressure with a try from Georgina Kreysa to lead 12-5. Continued attacking play and pressure on the Harrogate players created the opportunity for Plunkett to score her 2nd, converted by Saunders: 19-5.  Harrogate came firing back through a breakaway try, conversion missed, 19-10.  This fired the Saints on to control the final 10 mins of the game until Claire Mckenna went in to seal the victory 24-10.

Head coach Darran Brown said:
Incredibly proud of all the squad throughout the season again meeting the challenge of a difficult opponent. Harrogate are a very good side and showed their quality throughout, collectively on the day Saints had a little bit more and got the result the squad’s effort has deserved throughout the season.

Sarah and I could not have asked of any more from this group of players this year, however we believe we are only scratching the surface of their true potential and look forward to new challenges next season. 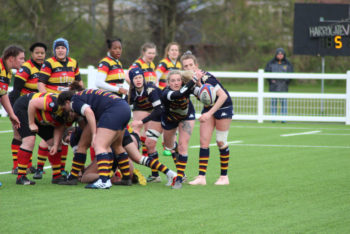 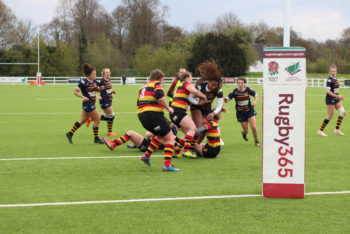