It has been a month lacking in consistency for OAs so this sparkling performance was welcomed by players and supporters alike. Albanians scored nine in a twelve try thriller to overcome a staunch Clifton effort and , as they did so, climbed just into the top half of the League table.

Both teams played fast, attacking rugby on a dry surface but a seriously organised Albanian defence throughout the first half allowed them to amass four tries and a conversion, taking the bonus point into the bargain.

Clifton offered a no nonsense physical approach which was no real surprise but they were not helped by a thirteenth minute red card which gave No8 Niall Gibbons first use of the showers.

The set piece went well for the hosts and the set scrum held up well against bigger opponents and this advantage improved as time wore on. For the most part the lineout followed suit and showed a marked improvement from some previous outings providing dependable possession on most occasions.

The experience and physical presence of Ross Hamilton and Nick Stevens bolstered the side and this helped create an attacking platform which functioned well all afternoon.

Increasingly Albanians forced Clifton into errors which offered up possession and position more often than not. Dan Watt marshalled the backs in exemplary fashion and his kicking out of hand neatly turned the visitors’ backline. Yet he was on target with just two conversions though the difficult wind did not help.

Eight A tries came from the backline, Luke Barber, Alex Ricci and Charlie Watson all scoring doubles. Morgan Thompson and Alex Chalcraft crossed once each and mighty Ross Hamilton opened the scoring.

The squad now look forward to a Saturday’s rest before travelling to Birmingham the week after. 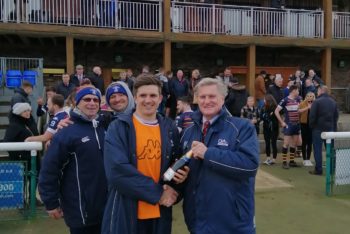