This was the best Albanian showing of the season so far and if Gavin Hogg and his coaching team had wished their hardest they couldn’t have had a better outcome. Not only was the result an impressive five-pointer, highlighted in all the mayhem were sufficient matters to be attended to in the next fortnight to improve performance by some way.

The detail which will concern everyone the least (so long as standards are maintained!) is defence. And what a standard! Albeit with the wind and sun at their backs, for the first ten minutes of this bruising encounter OAs faced a rampant visiting assault and were camped on their own line for much of this period. Too often Albanians have been described as imprecise; in these early phases concentration was utter, decision-making unerring and execution unyielding as each Redruth wave crashed into a line which got stronger by the minute.

As has been noted often enough if a team spends an extended period of time in close attack and comes away with nothing it is not just the time which is wasted. A far greater amount of damage is done to the attackers’ morale and Ross Hamilton and his men set out to exploit that in detail.

Dan Watt opened his account with a straightforward penalty after twelve minutes as the positional advantage moved to the home side. Charlie Hughes work rate was inspirational and his tackle count would have seen him ostracised by any right thinking prop of the 1970s but Toby Munday matched him, hit for hit.

Scrum and lineout, both a worry at times in previous weeks, worked well against a bigger set of forwards and this had its own beneficial morale boost throughout the day. Quite simply defence just got better and better. Then a five minute burst probably sealed the encounter as Morgan Thompson tore in from close range for the first try. Watt converted and improved Peter Warne’s timely effort just after the half hour.

Tom Notman broke the Redruth ice just after the interval for Richard Kevern’s conversion but Watt was on hand once more to improve Tom Bednall’s neat score moments later. Kevern sought successfully to narrow the gap with a penalty three minutes on but visiting discipline had already begun to show cracks. Luke Hattam, Jack Oulton and Connor Gilbert were all sidelined by George Richardson as the second half wore on.

Tom Holdsworth accelerated through one of the widening gaps in front of him for the bonus point with most of the fourth quarter still to play. Watt, who had helped himself to three successful kicks could not quite manage the difficulty provided by the breeze.

All will rejoice in a comprehensive victory and will relish the week’s break before the trip to Clifton on Saturday week. 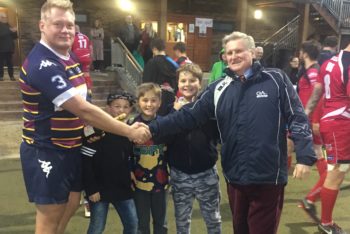